What might physics and faith, quantum mechanics and mysticism, have in common? Surprisingly, much more than you might think ...

During this holiday season, as we celebrate various religious and national holidays, our hearts typically expand – making it an excellent time to also expand our minds and reflect on the mysteries of the ultimate reality, the Creation.

The Ultimate Reality, According to Physics

In a recent episode of the outstanding podcast series, "Orbital Path," Dr. Brian Greene, director of Columbia’s Center for Theoretical Physics, describes how mathematics – which has served us extraordinarily well in explaining how the universe works – points to a possible ultimate reality: that everything in the universe is composed of indescribably small vibrating filaments, also called "strings." He likens these vibrating filaments to strings on, say, a violin – just as a violin string vibrates in different patterns to produce different musical notes, the filaments vibrate in different patterns to yield different kinds of sub-atomic particles, the building blocks underlying everything.

These strings might also explain how two particles, "connected" to each other via "quantum entanglement," can instantaneously transmit a disturbance of one to the other. This is true, even if the two particles are on opposite sides of our galaxy, which is about 100,000 light years across. This faster-than-light transmission seems possible because a "quantum thread" directly links the two particles in some mysterious way that bypasses space, while light is always constrained to travel through space.

In other words, physics predicts vibrations and connections are everywhere, even if they are beyond our current abilities to see or measure them.

The Ultimate Reality, According to Christian Mysticism

In “Swimming in Mercy,” a recent meditation based on her book Mystical Hope, Cynthia Bourgeault of the Center for Action and Contemplation reflects on how the Creation might be explained in terms of energy. She notes that matter is really just energy in a very "dense and slow-moving form" (an implication of Einstein's famous equation, E=mc2, where E is energy, m is mass, and c is the speed of light). Then, she asks whether it is "too great a leap to say that energy as we experience it – as movement, force, light – is a 'condensation' of divine will and purpose? In other words, energy is what happens when divine Being expresses itself outwardly."

She continues to reflect on biblical verses typically read in churches around Christmas:

And finally, she makes this remarkable statement:

If we understood Word to mean at root vibration – the out-speaking of the divine will and purpose – then the Word is that which makes manifest the fullness of divine purpose as it moves outward into form.

In this view drawn from Christian mysticism, connections among everyone and everything are universal, because the Creation and everything in it is the energetic manifestation – the vibrations – of the dream of the Divine, the Source, the Ground of Being, the One.

Jesus as Mystic – Seeing the Divine in Everything and Everyone

Mystics are persons highly attuned to the energy and vibrations of the One. Jesus and the Buddha are notable examples of mystics. 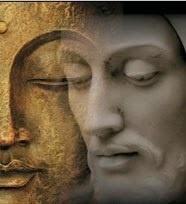 While faith traditions may be associated with mystics – for example, Buddhism or Christianity – at the level of the mystics, religions disappear, leaving only the pure spirituality underlying all faith traditions.

Jesus was a mystic and – while he lacked our knowledge of physics and string theory – sensed the vibrations of Creation and thus saw how everyone and everything are connected to each other and to the One. He understood how lying, greed, hatred, jealousy, bullying, shaming, belittling, exploitation of others or of the Earth, misogyny, racism, sexism, and the like run counter to the purpose of the Divine. In other words, any words or actions that fail to care for – or worse, deliberately harm – Creation and everyone and everything in it shatter the connections linking everyone and everything, going against the will of our common Source.

Jesus cared deeply about those affected by these disturbances of the Creation – those who are poor, in mourning, hungry or thirsty, or persecuted for a righteous cause (Matthew 5:3-10). This includes the guests at Greensboro Urban Ministry (GUM), whom my friends at First Lutheran Church and I serve breakfast every Friday morning. In the same passage, Jesus also affirmed those who work to lighten their load – those who are meek, merciful, pure in heart, and peacemakers.

At its core, the mission and message of Jesus was to restore connections broken by those whose agendas run counter to the will of the Word. Jesus' goal was to bring wholeness, goodness, healing, completeness, and justice to all the world – in other words, to increase shalom (roughly, yet incompletely, translated “peace”) in the world.

During the holiday season, we always see an outpouring of generosity to our community – contributing to GUM and other worthy charities, donating cold-weather clothing, pitching in to build a Habitat home, and volunteering to help feed and shelter our neighbors experiencing homelessness. All of these acts are certainly good and helpful, and they are part of what the Servant Leadership School of Greensboro (SLS) at Holy Trinity Episcopal Church would call “Journey Outward” – putting faith into action in tangible form, and serving a world in need.

Yet there’s also what the SLS calls the “Journey Inward” – deepening the inner life through various spiritual practices. Many Christian congregations subordinate this inner journey to the outer journey, at the risk of burning out volunteers by serving others without nurturing themselves.

The Christian Gospels may inadvertently promote this burnout by depicting Jesus more as servant leader and prophet, and less as mystic. These books focus on Jesus’ actions, not on his spirituality, yet he could only do the work he did because he was solidly rooted to Source and fully connected with the Oneness of Being.

The baby whose birth many of us will soon commemorate grew into a mystic seeing the connectedness of all, a servant leader working to increase shalom, and a prophet speaking truth to power, comforting the afflicted and afflicting the comfortable – whose voice was silenced by a brutal death, yet who still speaks to us, softly, gently, lovingly, calling us to restore the connections and harmonious vibrations of the Creation, as intended by the One.

This holiday season, I hope you reflect on the mysterious Oneness of Being, and begin your own Journey Inward. From that place of calm and strength, you can then undertake your Journey Outward.

Especially with the year we’ve had, we all desperately need to recommit ourselves to restoring shattered connections and fully bringing shalom – wholeness, goodness, healing, completeness, and justice – to everyone and everything we touch.