Todd tells the story of his daughter, Morgan, and her friend, Jenna, helping out at a homeless shelter - and what they learned from that experience.

I co-lead a group of volunteers who gather early every Friday morning at Greensboro Urban Ministry (GUM) to prepare and serve breakfast to 100 or more homeless men and women. Before breakfast is served, we share a brief devotion and prayer with our guests.

I usually arrange the devotion leader, and getting someone to do this can be hard – after all, surveys show peoples' top fear is public speaking. While I always ask our pastors to lead devotions once a quarter, my preference is to get non-clergy. Why? Because their stories are more authentic and heartfelt. Our volunteers and guests can more easily connect with the speaker's story. We've heard Charlotte talk about her backwoods camping and experiencing "thin places." We've had Ken share a wonderful poem which had touched his heart. We've been moved as Ginny shared her experience of her mother's death just the week before.

But the most memorable devotion of all? That was shared on July 19, 2013. Let me set the stage.

On April 7, 2006, First Lutheran Church launched its Friday Breakfast Community at GUM. A month or so after it launched, my daughter Morgan – then a seventh-grader, and without prodding from me – said on a Thursday evening, "Daddy, wake me up at 4:30 tomorrow morning – I want to serve with you." So I did, and she got ready. We rode together to GUM, and we made PB&J sandwiches and bag lunches together. Afterwards, we had breakfast at Chick-fil-a and then I dropped her off at middle school.

We did this again the following Friday, and over that second breakfast, Morgan asked, "Daddy, would it be okay if I brought a friend next week?" I said, "Sure, Sweetie – invite whoever you want, and we'll include them." Who received that first invitation? Her BFF since second grade, Jenna Sawafta. The next Friday, we picked up Jenna, all three of us made PB&J sandwiches and bag lunches, and I took them to Chick-fil-a, then dropped them off at school.

Both girls continued serving regularly with the group throughout middle school and high school, always inviting others to come with them, many of whom also became regular volunteers. Saying our formal "good bye and good luck" to these wonderful kids on June 1, 2012 – shortly before their high school graduation – was one of the hardest things our group ever had to do. 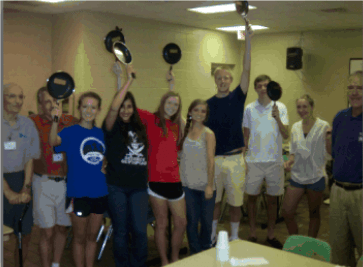 Just over a year later, in mid-July 2013, I was wondering who would lead devotions on Friday.  Imagine my surprise at this text message chain just a few moments later:

Friday came. Jenna and Morgan were there, along with many of their friends.  Then Jenna shared these words, her voice filled with strength and love: 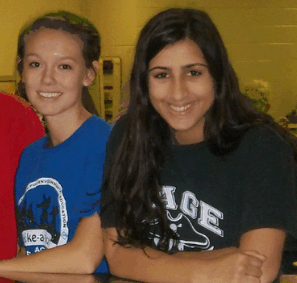 Jenna, thank you for sharing a heartfelt devotion – and, yes, you have MORE than returned that favor!

In his wonderful book, Jesus For the Rest of Us, former pastor John Selby comments:

Jesus seems to have said very little about what we should avoid doing in life. In fact, throughout the four Gospels, there are only two dramatic statements he's quoted as saying, loud and clear, that carry a negative intonation. They also happen to be the most insightful commandments ever to ring in human ears. They stand as our primary psychological challenge if we're to walk the path Jesus walked. (page 91)

What are these two statements? Judge not, fear not. Judgement is backward-looking – an action or outcome can only be judged in hindsight. Fearfulness is forward-looking – the outcomes of an action, or an inaction, are not known and thus potentially bad.

These days, many Christians seem to have forgotten Jesus' commands to judge not and fear not. Judging actions committed by terrorists have been wrongly conflated into judging Muslims and refugees. Fearing possible future actions by terrorists have been wrongly turned into fearing Muslims and refugees. We forget the baby Jesus was himself a refugee, and the adult Jesus was perceived by many as a threat.

After the scholars were gone,
God's angel showed up again in Joseph's dream and commanded,
"Get up. Take the child and his mother and flee to Egypt. Stay until further notice. Herod is on the hunt for this child, and wants to kill him."
(Matthew 2:13, The Message)

Jenna and Morgan remind us to not judge others whose faiths and backgrounds differ from our own. Morgan is fearless in calling out those who use their power, wealth, or status to demean, cheat, or hurt others – as several bigots and bullies have learned the hard way. Jenna – who is never at a loss for words! – overcame any fear she had of sharing her faith story with us.

Judge not, fear not. Jesus commanded it. Morgan and Jenna do it. Can we?

PS – Like all good stories, this story did not end on July 19, 2013. So, just like the storyteller Scheherazade in the Arabian Nights, I will save that story for another time.

PPS – This year, Christmas is on a Friday. Even so, my friends and I will show up at GUMearly that morning to prepare and serve breakfast, just as we always do. I invite you to come and serve with us.