A major storm hits – what can you do after it passes?

Central North Carolina recently experienced a significant ice storm. While icy roads were not much of a problem, ice on the trees was the

heaviest I've seen in years. The ice was accompanied by high winds, and both were preceded by heavy rains earlier in the week.

This combination of rain, ice, and wind created havoc for Duke Energy, the electrical provider for much of NC. Based on their outages site, Duke Energy reported a peak of over 108,000 customers without power in NC, with 48,000 of these in Guilford County where Greensboro is located. Most outages stemmed from trees falling on power lines.

Rain, ice, and wind also wreaked havoc on the lot we own next to our home.

The Lot Next Door

We bought the lot next door around 25 years ago, shortly after we purchased the land where we built our home. The previous owner had the lot bush hogged a few years prior, so when we bought it, there were just small seedlings coming up.

I never had specific plans for the lot – I just liked land. Growing up in Hickory, NC, my brother and I happily roamed our parents' 12 acres, exploring all corners of the property. This wandering and exploring apparently formed some deep part of who I am, because I always feel more peaceful when I walk in Nature.

Nature Does What Nature Wants

Because I had no firm plans for the lot, over the years, the seedlings grew to underbrush, then saplings, and then small trees. By the time our kids were elementary school age, I'd take them to play "fort" on the lot and my wife would play "garden" with them. One summer, they even planted a small wildflower garden along an edge of the lot.

As they got older, the kids outgrew playing "fort" and "garden." Nature took no notice, continuing Her slow, yet steady, march forward. By the time the kids were in high school and then college, I noticed the trees, most of them pines, had matured. The pines had formed a lovely canopy to walk under, and cushioned the ground with a bed of pine needles.

In February 2016, I decided to begin cleaning the lot – or, as I called it, "Picking Up Sticks." "Sticks" is a bit of a misnomer, since “sticks” referred to both fallen branches and downed trees up to about 6 inches in diameter. On that first day, my wife and I spent the afternoon picking up items from brush piles and briar thickets around the lot. When we finished for the day, we had a HUGE pile – up to 4 feet high, containing items up to 20 feet long.

I repeated that exercise, largely by myself, numerous times over the past 5 years, piling up underbrush and undesirable plants I'd removed. Once the pile reached a certain size, we would have it carted away (if they largely contained nuisance items such as briars or pokeberries) or chipped and made into mulch (if they were mostly limbs and small trees).

About 2 years ago, as I worked on the lot, I had the idea to turn it into a woodland garden. I began to notice small details, such as a rock with a lovely cloak of green moss, and easy-to-overlook native plants such as Striped Wintergreen, Crane-Fly Orchids, and Trillium.

I also began to pay attention to how rain water flowed across the lot.  I started to strategically place downed trees I'd cut and limbed to slow the water. For any native plants at risk of being trampled, I transplanted them into safe areas.

I walked the lot numerous times, developing a mental map of highlights – interesting plants, rocks, or terrain – and routes respecting the ground's contours. I also began to visualize incorporating evergreen plants – such as Green-and-Gold, Autumn Fern, and Holly Fern – and shade-loving hellebores to provide large swathes of color and interest during all the seasons.

A number of downed trees were too large to move. Their straight middle sections and thick branches were cut and placed, living on as borders for walking paths and boundaries for native plants I want to protect and nurture. The biggest sections remain where they fell, a visible reminder of Nature’s strength.

Finished Cleaning the Lot! Or Was I?

Nearly 5 years later, in January 2021, I had finished cleaning the lot. The lot was now largely cleared of branches and fallen trees, areas of interest and walking paths were marked with branches or logs of various sizes, and plants had been transplanted and nurtured. I took my wife to see how everything turned out, and it was obvious she could now see a woodland garden taking shape.

Views of the cleared lot

Shortly afterwards, the ice storm on February 12 and 13 changed all that. Over the course of those two days, I frequently heard loud cracks and crashes on the lot next door and knew a large branch – or perhaps even an entire tree – had broken off or fallen down. I knew things were coming down, yet ice and rain limited visibility, leaving me wondering what I would find.

When I could finally walk the lot and survey the damage on February 15, I was in awe of what I saw. Nearly 20 large pine trees had either been blown over or had been snapped like match sticks. 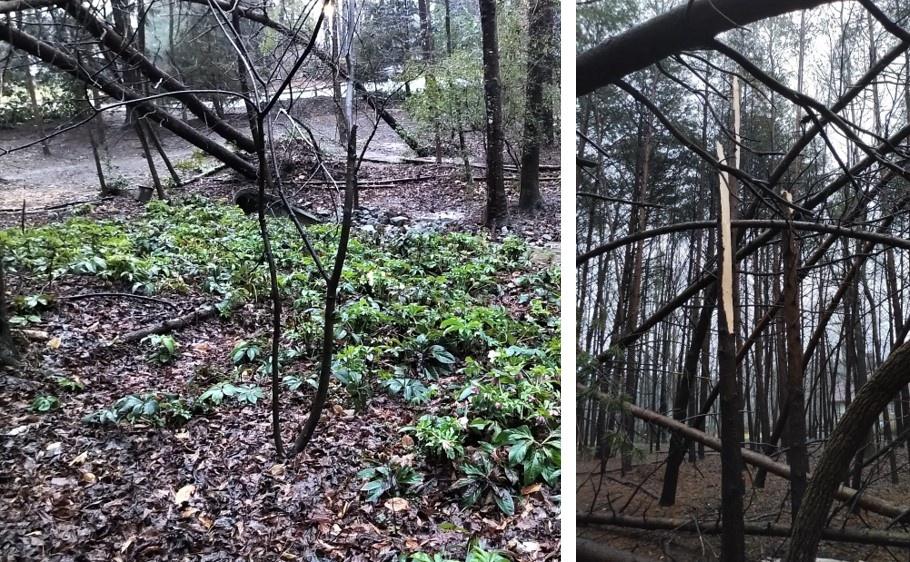 Damaged trees from the ice storm

The damage was worse than I'd imagined, yet I was also curious to answer one basic question: Why did so many pines blow over in a one particular area while – just a few feet away – pines of similar height, diameter, and apparent health break apart about 10 to 15 feet off the ground?

The Calm After the Storm

As I looked more closely at the pine trees uprooted by the wind, I saw first-hand what I'd always heard – pine trees, or at least these species of pines, have long shallow lateral roots and virtually no tap root. The recent heavy rains had saturated the ground, leaving the pines' shallow lateral roots unable to grip stable soil to withstand the high winds.

The trees that had snapped? The evergreen pine needles – concentrated near the top of the tree because pines drop their lower branches as they grow – provide color and protection year-round, yet also offered the ice a place to stick and make the trees top heavy. Furthermore, the ice increased the surface area of the branches and needles, making them a better target for the winds.

As I walked around the lot to take in the changed terrain and scarred trees, I was struck by how calm I felt. After all, I'd spent years cleaning up the lot and beginning its transformation into a woodland garden – and all that work had been upended in 48 hours.

Yet, it was because of the years I'd spent working on the lot I realized "This is just how Nature is – all I can do is respect Her awesome power, and revise my plans. After all, She's not going to change for me."

As I surveyed the damage, I began imagining the tasks I could do once the weather cleared and the ground dried – pick up branches, cut and limb downed trees, save usable pieces and pile up the rest for shredding, tend to damaged plants, and imagine new areas of interest and paths on the lot.

In the meantime, I could immediately begin to research types of pine trees having good tap roots – Loblolly Pine, Longleaf Pine, and Red Pine do – and techniques that should allow the tap root to solidly anchor the tree in the red clay soil. By a combination of tree choices and planting technique – preparing a hole exceptionally well, or as the landscaper told me when we built our home, "Todd, a $5 plant in a $50 hole always beats a $50 plant in a $5 hole!" – I envisioned a stand of pines better able to withstand a severe storm.

The Moral of the Story

I hope you've stayed with me, because there IS a moral to this story. Whether it's your work life or your personal life, you will confront forces beyond your control. When that happens, it's best to recognize your limits, focus on what you CAN do to move forward, and remain curious about the situation. In other words, practice mindfulness.

A mindfulness technique I use is based on one taught by Tara Brach, a clinical psychologist and Buddhist teacher. Tara teaches a technique called RAIN, an acronym of the four-step process:

Limits are a fact of life for everyone, so you need to honor the impact they have on your life. Staying objective allows you to investigate the situation and ask yourself, "What can I do to make things better?" This question helps you avoid blame for the situation, focus on factors you CAN control, focus on the ONLY person you can control (yourself), and brainstorm possible solutions. Remaining curious permits you to remain grounded, yet also connect with something larger than yourself and thus expand your mind and your options.

After you've got some initial ideas from repeatedly asking and answering that question, it's time to put your ideas into action. "Plan-Do-Check-Adjust" is my variation on a business technique to continuously improve processes, products, and services. Even if you've never heard of it, you've likely used it because it is intuitive:

I experienced mindfulness in the quiet calm coming from my acceptance of Nature’s actions. I also experienced it objectively assessing the lot and determining tasks I could do in both the short-term and longer-term to create a new version of my desired woodland garden. My curiosity led me to question what led certain pines to blow over and others to break off – this focus permitted me to investigate possible factors, leading me to this answer of why some trees blew over while their neighbors just a few feet away broke.

With numerous ideas for action, I can begin my "Plan-Do-Check-Adjust" cycle and work towards my ultimate goal, a more resilient woodland garden.

There Will Always Be Another Storm ...

I experienced a major ice storm in mid February and, as I write this, central NC is preparing for the last act of another ice storm that has – so far – been mild. Whether literally or metaphorically, there will always be another storm, something much larger than you and beyond your control, something that will upend your plans. When that happens, practice mindfulness, do your best to stay objective, ask yourself "What can I do to make things better?," remain curious about the situation, and run your ideas through the "Plan-Do-Check-Adjust" cycle.