Have you ever thought about what constitutes a "system" – and what to do when one or more pieces of a system break?

Over the past few months, I've met with several companies – some are clients, others are prospects – to discuss potential projects. They all wanted to discuss overhauling or replacing various systems they knew were broken. While they all LOGICALLY KNEW they needed to do something, what was interesting was the varying degree they EMOTIONALLY FELT they needed to do something.

Before discussing the interesting differences I observed, I need to first explain some background concepts.

What Is a System?

At Todd Herman Associates (THA), we define "systems" as "the overall combination of People, Process, and Technology (PPT), taken together, to yield business results." Systems with poor alignment of their PPT yield lower business results (represented by the size of the ROI box in the Venn Diagram) ... 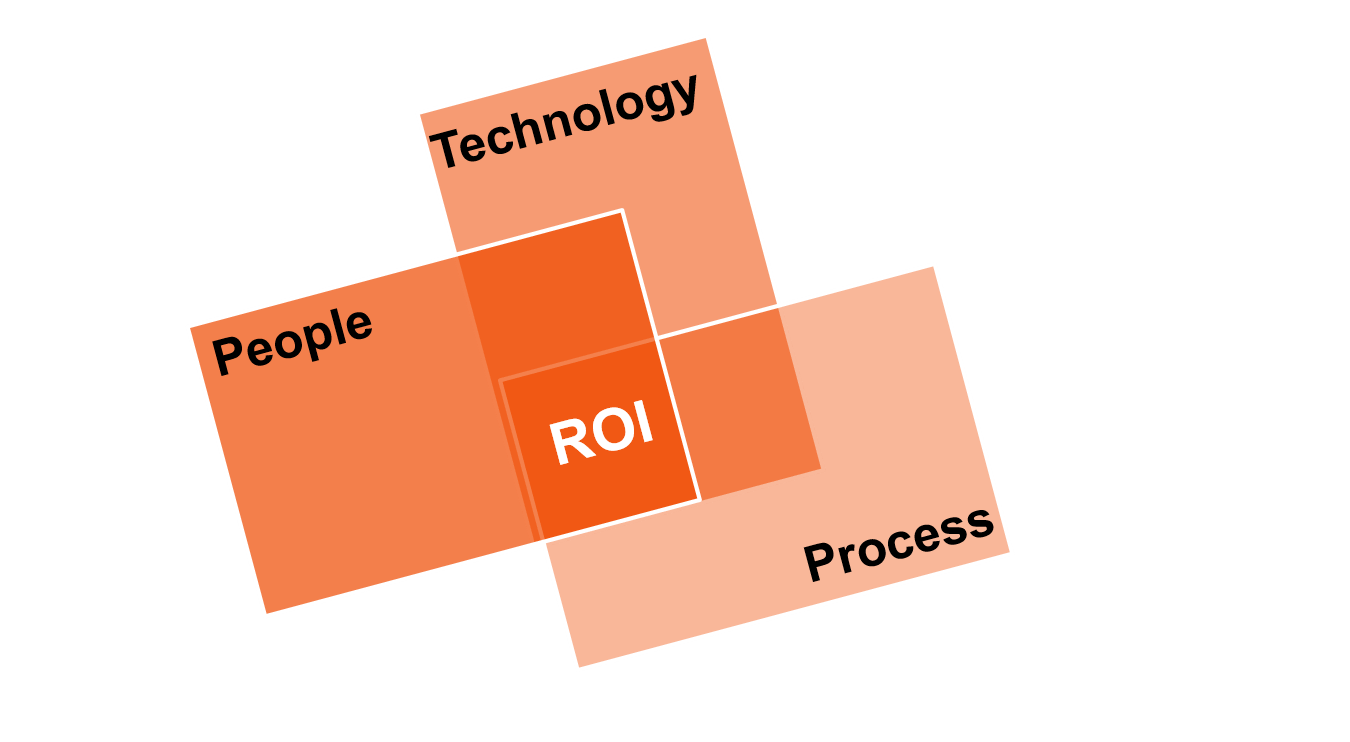 ... compared to the higher results produced by a system with tightly aligned components. 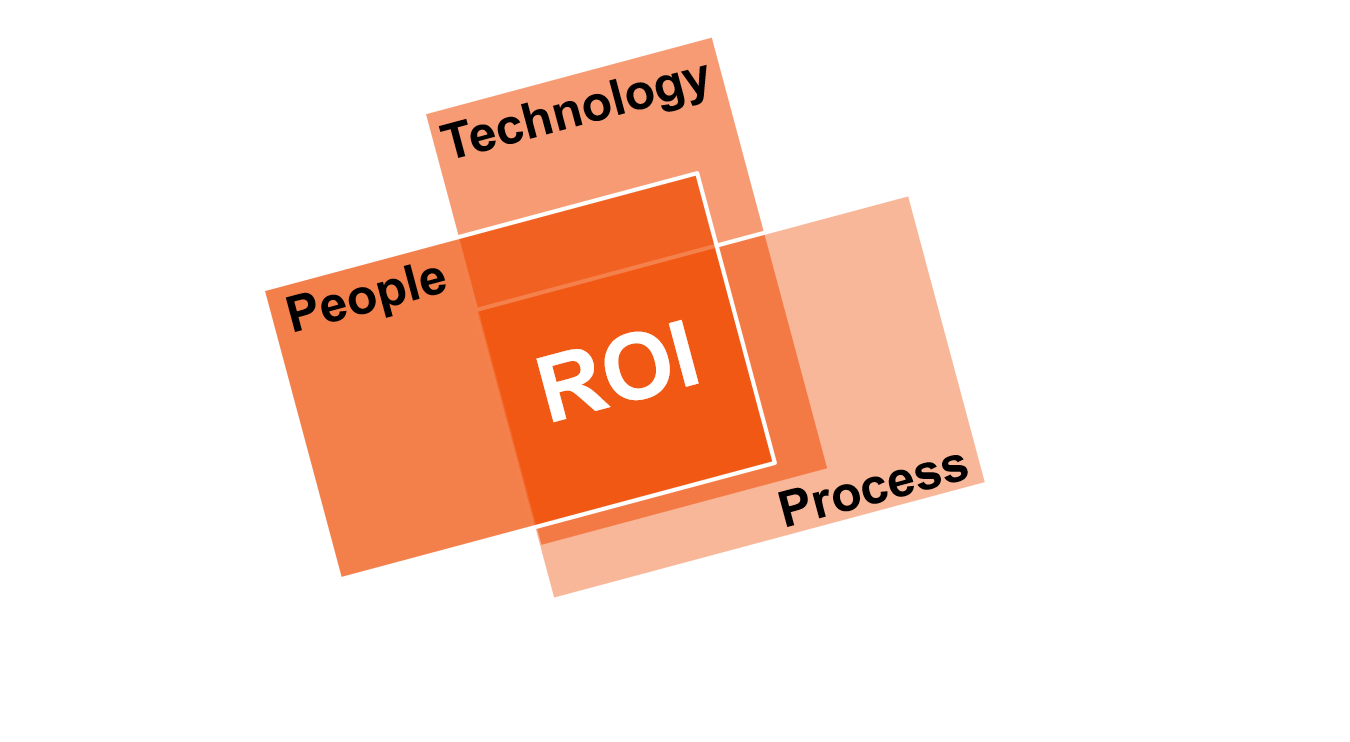 As you can see from the diagrams, improved business results await companies willing to better align their PPT.

What Causes a System to Break?

Some systems break because of a company's success. I recall a statistic stating that a system is broken once a company has grown 40% – and the faster the growth, the more quickly the system will break. Why will growth break a system? Because one or more of the Technology, Process, and People put in place pre-growth will not be able to handle the stresses from a significantly larger volume.

How Can a Broken System Be Fixed?

Regardless of how a system broke, it can be fixed. How? THA's approach involves reviewing the system, identifying the sources of the breaks, and then recommending some combination of process improvements and technology usage to fix the breaks. One note – we presume that a company's people did not cause the break and will perform better, once the break has been fixed. If we conclude otherwise about one or more people, we will share our observations with our client.

"Need to Fix" versus "Want to Fix"

What I found interesting about these discussions was where individuals stood on the scales of "Need to Fix" versus "Want to Fix." Visually, this could be: 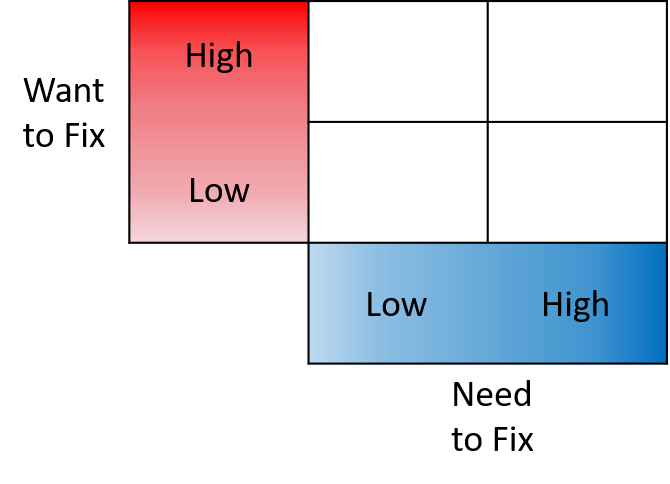 In our discussions, here's what I saw.

For Company A, our initial meetings indicated both the top management and the staff doing the work were "High" in both "Need to Fix" and "Want to Fix" a key custom business system. Once the company became a client and we began working to address their issues, it quickly became apparent the source of the problems was technology. Unfortunately, there was little we or their IT support company could do about it. Why? Because the underlying application development platform was hopelessly obsolete. Functionality that worked well in the Windows 7 era was no longer supported in the Windows 10 era. Other than address day-to-day breaks, little can be done until key pieces of the application are overhauled using a current platform. For now, the staff tasked with getting things done are "High" in both "Need to Fix" and "Want to Fix," while management remains "High" in "Need to Fix" yet has slipped to "Low" in "Want to Fix" because of capital needs in other areas.

In our initial meeting with several top executives and managers of Company B, all were "High" in "Need to Fix" their broken ERP (Enterprise Resource Planning) system. The problem with a broken ERP system is it can only be fixed by selecting and implementing a new ERP system, and all participants were "Low" in "Want to Fix." I can't blame them – undertaking an ERP selection and implementation project truly IS a big, scary proposition. To their credit, everyone at the meeting was willing to overcome their anxiety about such a project, because they realized the mix of products and services over the next 5 years would go from a small percentage of custom solutions, to custom solutions being at least half their total revenues. The changed revenue mix, coupled with their recent 10% year-over-year sales growth, meant their current system would quickly progress from "broken" to "collapsed" if nothing was done.

During a lunch conversation with the controller of Company C, she shared the challenges – high growth and an antiquated ERP system – facing her family-owned company. While she was "High" in both "Need to Fix" and "Want to Fix," the company was in the middle of moving its offices and operations, so everyone was focused on that until early 2020. She also noted there were multiple decision makers – while one would be "High" in "Need to Fix," the other was likely "Low" in "Want to Fix." While we eventually plan to meet with all the parties, we can only present them information to make a decision. It's up to them to determine the "Want to Fix" priority.

Our introductory meeting with the three top executives of Company D looked very promising! They had heard compliments about our work for another company, and wanted us to do a similar project for them. All three seemed "High" in both "Need to Fix" and "Want to Fix." In following up with this prospect, I learned they had become "Low" in "Want to Fix," even without knowing the project scope and potential investment. My intuition? After our conversation, they had considered what we said and determined this would be a bigger commitment of their time than they imagined. We agreed we would connect again in early 2020.

The situation at Company E was my favorite – an existing client had looked at a small, yet growing, source of income and determined their Excel-based stopgap measure would not serve them much longer. The folks at this company were "High" in both "Need to Fix" and "Want to Fix," and were also realistic in the time, effort, and budget this would require – perfect! This project kicks off in a few days.

To recap – Companies B and E decided to pull the trigger and start fixing their systems, Company A engaged us and then hit capital budget limits once we and they fully understood their needs, and Companies C and D are deferring decisions for several months. 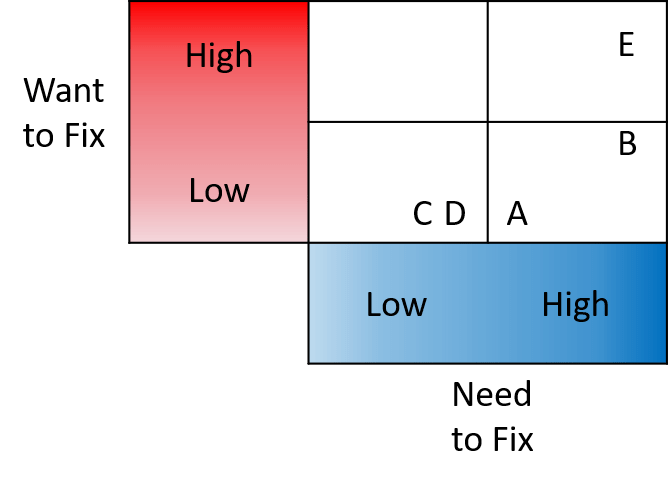 While I wish every business was always willing and able to fix their broken systems, I know this is unrealistic. All of these companies either have, or appear to have, good business reasons for their decisions.

Some reasons these and other companies have for not being able to address an issue at a certain time include:

The last two reasons indicate a disconnect between those doing the work and those overseeing the work, likely the result of poor communication from executives to staff or vice versa. At some point, the unaligned goals or asymmetrical pain will jump from one group to the other, which should result in either doing something, or deferring action for one of the first six reasons above.

Sometimes, there are really good reasons for not doing something when it really needs to be done. Trust me, I've had timing, staffing, and capital limitations just like everyone else. In my case, what I typically do is undertake one or more projects I’ve placed on the back burner once the relevant limitations have lifted. Most recently, I've lacked the bandwidth to start and oversee several internal projects because of an extraordinarily high client service load. When my client load became more manageable , I used the opportunity to consolidate our technology infrastructure, replace an outdated billing system, and overhaul our web site, all in the span of a few months.

Of course, human nature being what it is, reasons can easily mask rationalizations. You always have a choice to make – get started, or wait. Perhaps you want to avoid the pain of getting started – if so, are you ready to face the pain of regret? Perhaps you believe the ROI of doing nothing is zero – even though such an ROI is actually negative, it remains an "opportunity cost" ... until you realize a competitor has now leapt ahead of you and made it a "real cost." If you suspect your reason might actually be a rationalization, let me encourage you to click through and read the two linked articles.

Broken Systems Need YOU To Help Fix Them

It's true – broken systems don't fix themselves. The process and technology need one or more people in the form of managers or executives to step up and take responsibility for fixing them for the sake of their organization. If you know what needs to be done and have the internal capacity and skills to do so, go for it. If you’re not sure your PPT are providing the ROI they should, please give me a call and let's discuss whether THA might be able to help you diagnose and fix your broken systems.