For background on this particular project, please visit Fish Don't Know They're In Water.

This client in the commercial construction industry had, like most entrepreneurial companies, built its information systems infrastructure – including hardware and software on servers, desktops and laptops – over many years. This approach led to a wide mix of software versions in use.

Multiple versions of Windows operating systems (including XP and Windows 7) and Microsoft Office (XP, 2003, 2007, and 2010) made troubleshooting and support difficult. Newer versions of Office no longer supported the file formats of older versions. The main server hosted an outdated bundle of server applications, running on a very old operating system, and the mail files were quickly approaching the email server's unchangeable storage limit.

The Chief Financial Officer had become the implicit "Help Desk" for his company, receiving many user questions and handling mundane support tasks – which consumed a significant portion of his day.

Solution: Move to the Cloud with Office 365 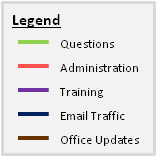 Our client saw a cloud-based solution as the way to alleviate their various issues, and Microsoft Office 365 met all their essential needs. Thus, we planned their Office 365 implementation, then guided our client in rolling out this software and services subscription, and in troubleshooting issues.

Implementing Office 365 also required a number of small, yet long-overdue, infrastructure improvements, including:

Implementing Office 365 solved the Microsoft Office support issues – every user now has the same version of Office, which is automatically kept current, meaning:

Our client has found Office 365 delivered: